Below are three short examples of my Japanese to English translation work.

One is a newspaper story about fate that caught my attention soon after the March 11, 2011 earthquake. Another is a segment of a talk given by the Kyoto sculptor Yo Akiyama at the Museum of Fine Arts in Boston, and the last is a humorous story about a fast-living Buddhist priest.

In reality much of the translation I do is technical, primarily of patents. With some pride I can say that one of Japan’s largest patent firms entrusts me with a significant portion of their translation for new US filings. They value the technical fidelity, but also the clear readability of my translations, which should contribute to a positive disposition before the patent examiner.

The experience of translating several million words of scientific and engineering documents underpins my vocabulary and fluidity as a technical interpreter, and the experience of interpreting at so many patent litigations, which may hinge on single words or phrases in a patent-at-suit, in turn heightens my awareness of the importance of precision in translation.

This fishing port in the northern section of Ofunato City, known for its farm-raised awabi (abalone) and wakame (seaweed) took a decimating blow from the tsunami. Almost every facility of the 300 member Yoshihama Fishing Cooperative was destroyed. But the majority of the fisherman at work that day in Yoshihama Bay escaped the worst. What saved them was a split second decision.

On March 11th at 2:46 pm, the tsunami swallowed up ten fishing boats at work thinning out wakame seaweed [beds].

“It was different from the usual earthquakes,” said Hisashi Kashiwazaki, 59. A loud rattling sound rose from the bottom of the ship. From the trees on the cape surrounding the bay he could see cedar pollen leap into the air like sparks in a forest fire.

With him on the boat were his wife Hisami, 54, and his second son Koji (26). Kashiwazaki-san stopped what he was doing and hurried out to sea, anchoring at a depth of about 70 (230 ft). The tsunami rushed in about 15 minutes later. “All that happened [to us] was that the whole boat rose with the water level. We didn’t shake at all.”

The three ton fishing vessel carrying Takahito Michishita, 47 and his father Yoshio (76) was greatly shaken by the earthquake. What flashed through Takahito’s mind at that instant was some wisdom he’d heard from long ago: “tsunamis aren’t as high in deep water.”

His father Yoshio had also heard from older fishermen that they “had been saved during the Sanriku Great Tsunami of 1933 by going out to sea.”

They ran their engine full throttle and headed for a location several kilometers out to sea. They had no sense of the boat passing over the tidal wave. But looking back on it, they could see the rising wave in the port and white foam of the wave breaking.

Many boats in harbor at the time of the tsunami in Chile last year were also able to ride through by heading out to sea.

The Fisheries Agency published a guideline after the Fukuoka western offshore earthquake of 2005 recommending that in cases where escape to a marine area is faster than going to land, “evacuation should be to an area with a depth of 50 meters or above, and to an even greater depth when a major tsunami warning is issued.” 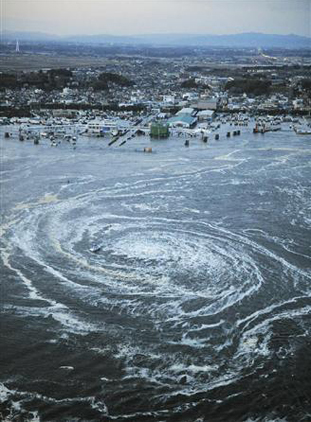 Whirlpool created by the tsunami
津波によって出来た渦

Akiyama Yo is a celebrated Kyoto sculptor. Before the pandemic, I interpreted a talk he gave at the Boston Museum of Fine Arts, where I have also interpreted for other Japanese artists, including superstar Takashi Murakami, whose packed talk I interpreted simultaneously through headphones.

On that occasion my younger daughter was in the audience. Afterward she informed me that she and everyone else could hear me snorting through her headphone every time he told a joke . . . Mr. Murakami noted with evident satisfaction that he was getting more laughs than usual, and thanked the invisible interpreter, but my daughter’s criticism was precise, if stinging, and ever since I have taken more care about the sounds I direct to the microphone.

CF with Yo Akiyama

My embarrassment with Mr. Akiyama took a different form. Prior to the talk I received a pdf containing a script in Japanese. I read it, of course, but somehow decided his talk would be extemporaneous, not a literal reading of what looked like an intellectually dense manuscript. I thought so because that’s the way practically every other talk has been in my experience, and I’ve gotten used to the dynamic of watching a Japanese speaker and trying my best to communicate content, emotion, and humor to the audience in real time, leading if possible to a rich Q and A session.

Fortunately I was able to speak to Mr. Akiyama and observe some of his wonderful work for an hour or two before the talk. I questioned him carefully about concepts in his manuscript, which I learned he intended to read verbatim. I was obliged to produce what interpreters call a sight translation, reading the Japanese manuscript as I went. I have been in this situation many times in technical depositions, where I am suddenly asked to render a translation of patent language or perhaps lines from an email, but not an entire talk! “Why not just listen to him read and translate what he says?” you ask. The reason is density. Written language packs in more conceptual complexity than speech, making it very challenging to interpret with full accuracy. Here’s an example from his talk:

“…As I mentioned before, earth [clay] is a special presence which stimulates my imaginative powers, but for a long time I had been unable to discover any particular meaning to firing. To begin with, the medium of ceramics inherently contains the element of transformation. The creator is present at the many transformations during the various stages of production, paying scrupulous attention to qualitative changes in the clay as it dries and controlling its transformation from earth to ceramic.  In my production, too, I was always repeating [the process] of making one thing happen while killing off something [else]. This influenced my sculpting consciousness, and I tried to fold in the elements of transformation and time into my works. However, the atmosphere after this major transformation from earth to ceramic seemed divorced from the endless flow of time, and this made me uneasy.”

Throughout the talk, the audience remained disturbingly silent, compounding my worry, so I was surprised to hear a burst of applause at the end. Later one attendee even wrote that I had done a “superb job,” but I know how much better it might have been. This talk deserved careful reading over and over, practically memorizing my own translation. I re-learned an important lesson: for good results, prepare, prepare, prepare. 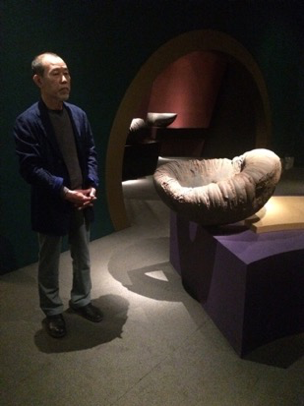 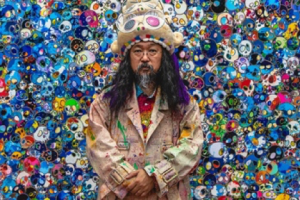 At first he denied [the charges], saying “I was eating Nara pickles,” but in a subsequent investigation admitted that he had been drinking whiskey at a bar in Kashiba City.

According to the police announcement, suspect Hasumoto is believed to have been driving a passenger vehicle in an intoxicated state on National Route 24 in Soga-cho, Kashihara at about 1:20 am on the 24th, and to have made a right turn at an intersection on a red light. An officer from the Nara police noticed [Hasumoto] during his patrol and asked him to stop, but [the suspect] fled approximately 1 kilometer.