Welcome to my website. As detailed in my resume and recent work, I’ve been a professional Japanese linguist since graduating from Harvard with a degree in modern Japanese history in 1980 after finishing first in my class at the one year Stanford Center program in Tokyo (now in Yokohama). I’ve worked as a businessman, reporter and field producer, but more than anything as a dedicated translator and interpreter in diverse fields such as science, engineering, IP litigation, and culture. Interpreting has enabled me to meet outstanding practitioners of these fields, some of whom I introduce in my “At Work” section.

My Japanese has come through deliberate study and by now thousands of hours of on-the-job practice. I keep an evolving online dictionary. Much of my work has been at trials and associated depositions, where the other side hires a “checker” to assure interpreting quality. Errors are called out for all to hear and see on the record, so the keen wish to avoid embarrassment has taught me to listen carefully to each word out of a speaker’s mouth and interpret with intense focus. In a deposition, this saves time on the record and leads to cleaner transcripts. Please see this list of recent court cases and arbitrations.

I also interpret simultaneously, most recently using the special channel provided for that purpose on Zoom, which I recommend. 100% accuracy is virtually impossible in most simultaneous settings, but I believe strong background knowledge is key to improving that percentage. English and Japanese sentences are essentially inverted in word order, so a Japanese sentence often ends where its English equivalent begins. (English: “I want an apple.” Japanese: “apple [I] want” etc.) Simultaneous interpreting requires guessing where the sentence will end up before the speaker gets there, then modifying as needed to correct wrong assumptions. The quality of the guess depends strongly on the interpreter’s subject and general background knowledge. I did post-grad study in electronics and worked in that field, and later worked as a television journalist, but it is a mostly sponge-like interest in science, business, government, art and many other fields which helps me with this challenging work.

More primitively, I love the sound of the Japanese language. An example on this site is my translation and subtitling of an Open University talk, “Do You Know Yourself?,” by writer Shusaku Endo. His analysis of the human psyche is intellectually compelling, but so is his use of onomatopoeia, one of the great strengths of Japanese. For example, he says, “what we suppress…is bubbling away at the bottom of our souls, like magma in a volcano, burning as it waits to erupt,” using “busu busu busu busu” to represent the physical sound of boiling (see this at 11:27 in video).

Feel free to give me a call in English or Japanese and test my abilities. I look forward to assisting you in any way I can. Thank you! 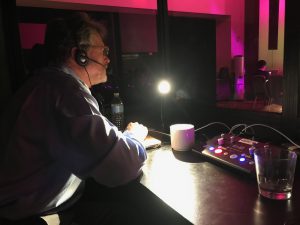 Simultaneous interpreting in a booth, 2019